Guest blogger Daniel Hoffman is from Reisterstown, Maryland and attends the University of Maryland. He is a member of the U.S. National Paralympic Soccer team. 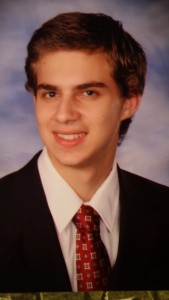 Growing up, a lot of people I came in contact with asked me what it’s like to live with a disability. My response was always the same – “ I don’t know.” Having had one-sided cerebral palsy since birth, I don’t know what life is like without it. That may sound weird, but I’m so used to holding all glasses with my left hand and giving weak handshakes with my right that it has just merged into part of my identity.

What is the best advice I can give with people living with a disability who are trying to improve in athletics? Wipe it out of your mind that you have one until you can’t get any better than the task without it. Growing up, I played soccer, and it would be pretty easy for me to say I’m not good at it because I’m disabled. Instead, I focused on individual aspects of the game and practiced. No matter how bad your disability, there is always potential. There’s always the ability that even though you may not be the best in your class or on your team, you can be better on a Friday than you were on the Monday of that week. Eventually, after enough Fridays, you have to look at yourself and ask, did I improve? For me, the question was could I pass with my weak foot? This took me about half a year to get down, but after I got it, I felt like I’d won the Olympics.

The biggest mistake you can make is comparing yourself to someone who is not disabled. Your success measures must be internal. Your disability individualizes you. Everyone has a different level of disability, just as everyone has a certain level of natural talent. There may be a part of you that says “I look awkward, or I don’t appear symmetrical.”  Compared to the general population that may be true, but you’ve got to think if that voice is really important. Whenever I wear a short sleeve shirt, I think of how one of my arms bends and the other is straight. I look at art and television and realize that no one there is like me. Whenever I squat, my form looks incorrect, but it’s as close to correct as I can get it. Often, when I lift at a gym where I’m not a regular, a trainer will try to correct me and I’ll have to go into a long speech about how I am doing it right. This can get annoying, but it’s just something you’ve got to deal with.

Finally, a key point to remember is that there is a whole disabled community out there rooting for you.   Unlike other communities, they may not be in close proximity, but they are there. This past summer I have been fortunate enough to join the U.S. Paralympic National Soccer Team. Through it, I realize, that there were people growing up in all parts of the country who had similar struggles as my own. We were able to joke about our shared experiences and have a good laugh. In reflection, the struggles related to my disability make me feel more accomplished than I would have if I didn’t have CP. There’s a competitive hunger in me to be more athletic than the general population that gets me going. If  I didn’t have that, Id probably be a couch potato.